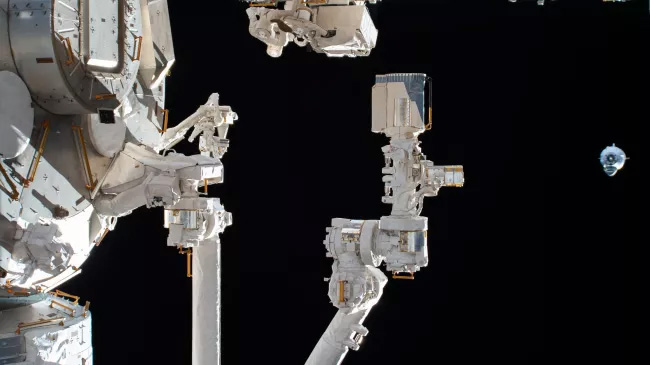 A golden age may be coming for human spaceflight research as more astronauts than ever fly to the International Space Station (ISS) aboard commercial crew vehicles and through private companies, NASA officials said during an online conference Thursday (Aug. 27). “We’re going to have more people on the International Space Station than we’ve had in a long time, and [research and development] throughout is actually going to increase,” NASA Administrator Jim Bridenstine said in opening pre-recorded remarks for the ISS Research & Development conference. Bridenstine was referring to a new era of human spaceflight that opened on May 30, when SpaceX launched its first-ever crewed mission, the Demo-2 test flight. Demo-2 sent NASA astronauts Bob Behnken and Doug Hurley to the ISS for two months, ending on Aug. 2 when SpaceX’s Crew Dragon capsule made the first American ocean splashdown from orbit since 1975. Demo-2 was made possible by more than a decade’s worth of work across several presidential administrations. The goal was to spur the development of private American spaceships to fill the shoes of NASA’s space shuttle fleet, which retired in 2011 after 30 years of service.

The space shuttle typically ferried crews of seven astronauts to and from the space station. Russian Soyuz spacecraft, the only orbital crewed vehicle available for the past nine years until Crew Dragon came online, can carry just three people at a time. Crew Dragon and Boeing’s delayed (but forthcoming) CST-100 Starliner capsule will carry four astronauts apiece on their operational ISS missions for NASA. (Both companies won multibillion contracts from NASA’s Commercial Crew Program in 2014.) “For commercial crew vehicles, we’re continuing to work with the teams,” Montalbano added, saying the agency is aiming for a “steady cadence” between SpaceX and Boeing to send astronauts to the space station to perform science and research. The first operational SpaceX crewed mission is set to fly in late October, and NASA is accelerating crew announcements for future flights — such as when it recently named astronaut Jeanette Epps to the first operational Boeing Starliner mission to the space station, which is expected to launch next year.