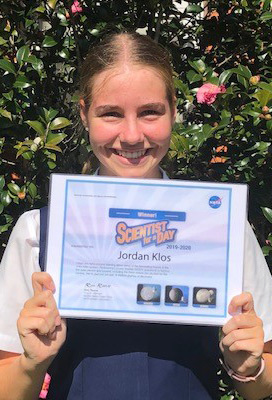 Jordan’s essay submission for the NASA Scientist for a Day competition was on the topic of Pluto’s moon Charon.

Jordan was winner of the year 9 to 11 category for her chosen topic.

Read her essay below:

Charon (discovered in 1978) is the largest satellite of the five known moons of the dwarf planet Pluto. The name Charon originated from Rome, meaning the mythological ferryman of the Underworld, who carried souls across Acheron a mythic river surrounding Pluto. Charon is the most compelling satellite of the three moons Miranda, Triton and Charon due to its distinct geological features and possibility for existence of life. If a spacecraft were to orbit Charon’s surface or potentially disembark, the rover could find an undiscovered landscape consisting of many exotic and pristine land factors that may result in life inaugurated.

Due to the 5.1208 billion km between Charon and the Sun, Charon has succumbed to a cold climate with its surface consisting of 965km iced canyons, mountainous ranges, and low-density craters. Across the 4.58 million km^2 that Charon occupies, only the side facing Pluto has been seen on the last mission to Charon in 2015. Thus, the last occasion that photos were taken of Charon was over 5 years ago and dramatic geographical changes may have transpired which changed Charon’s surface composition. Movements to Charon’s exterior structure include landslides, erosion, and the melting of iced caused by climatic changes similar to changes on Earth. These changes caused significant impacts causing cliffs in Charon’s Grand Canyon to potentially rival against the Verona Rupes on Miranda (at least 5 kilometres) for the tallest known cliff face in the solar system. Whilst Charon’s canyon is hypothesised to be 9 kilometres deep, the actual depth remains unknown, with no data in correlation to what lies at these depths. Omitting Charon’s canyon, other significant features are the mountain ranges and craters which are named according to science-fiction novel characters and themes. For instance, Charon’s only planum was named after a fictional destination Vulcan Planum (Star Trek).

While a large proportion of the surface area of moons and planets have been discovered, indicating that there is no life within the Solar System, Charon’s opposite facing side from Pluto (away) has been left pristine creating theories to develop as to whether life may exist on Charon. Despite Charon’s temperature reaching -220°c, life can still be found or developed due to the numerous organic material resources such as water and tholins, which are organic macromolecules that are essential ingredients for life. Not only does Charon have a liveable atmosphere consisting of gases methane, nitrogen and gases released from Pluto’s atmosphere, but the last mission from NASA was in 2015 allowing over 5 years for bacteria molecules develop from the damp, cold biome. These key culminating factors are vital as to why Charon is an intriguing satellite.

With the ever-changing planet structure and composition along with the variety of natural organic matter on Charon, if a spacecraft went to Charon it may find movements within and on the surface of the planet. It may also discover new life or bacteria molecules due to the high probability for life from the vastness of essential resources for life.

2021 YES! Youth Encouragement Scholarships awarded to one of the Gadget Girlz
May 13, 2021