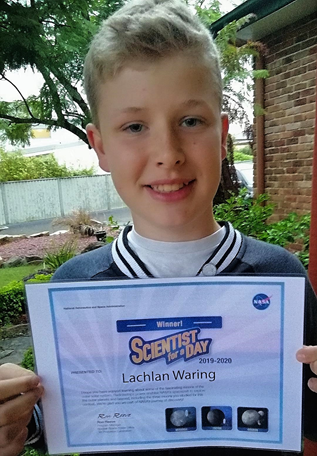 Lachlan’s essay submission was on the topic of Neptune’s moon Triton.

Lachlan was winner of the year 9 to 11 category for his chosen topic.

Read his essay below:

Triton, Neptune’s largest moon contains many mysteries yet to be discovered. Its attributes have long been unknown to scientists. Photographic images taken by Voyager 2 in 1989 showed glimpses of its true uniqueness. However, still to this day, further investigation is required to greater our understanding. Therefore, it would be the most suitable moon to send a robotic spacecraft to.

In the past, we have only been able to see half of what this moon contains. Through the eyes of Voyager 2 passing by on its mission to study the outer planets, images of a grey, brown moon were taken. In these photos, we saw that the surface contained a thin layer of frozen nitrogen with occasional volcanic plains. It also had scattered geysers which erupted nitrogen gas. Data sent back by Voyager 2 showed that the atmosphere contained mainly nitrogen, although there was a small percentage of methane, mainly due to its volcanic activity. Its mantle is made of ice with a core believed to be a combination of rock and metal; however, this is still undetermined.

What is fascinating about this moon is it has a retrograde orbit. This means it orbits in the opposite direction to Neptune’s rotation. There is so little known about why this orbit happens; however, speculation suggests that it was captured by Neptune’s orbit after its formation. To gain certainty we need to further our investigation of this moon by sending a robotic spacecraft.

Another reason for sending a spacecraft to Triton, is to investigate its natural resources and find out what it is truly made up of. What lies below the surface is currently somewhat limited. Therefore, if a robotic spacecraft was to be sent it may be able to penetrate its surface and look for valuable resources or perhaps an element previously unknown to the periodic table. Secondly, if we discover more about Triton’s resources perhaps, they can be used for fuel to explore the universe in a further capacity. With our knowledge of the resources of this planet expanded there may be many more opportunities that arise for further exploration.

Finally, I believe that we should explore Triton simply because there is so little known about all its aspects. This can include but is not limited to its orbit, surface, origin, history and formation. From knowledge of these aspects, many opportunities may arise aiding us into the future. We will also have more known general information about the moon.

Therefore, in conclusion, I strongly believe that Triton is the most suitable moon to send a robotic spacecraft to. The reasoning for this is that there is so little known about the moon and it deserves to be explored in a further capacity.