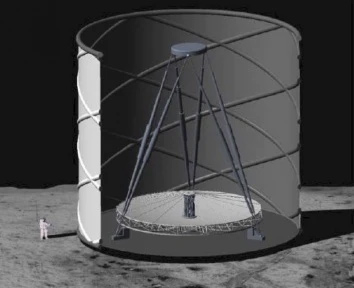 Scientists want to build a telescope on the Moon to look at something even older: from the lunar surface, we’ll be able to look at the universe’ earliest stars

Ever since astronomers began staring at the sky using telescopes, they have worked to build bigger and better cosmic eyes to help them see deeper into the universe. Today’s telescopes range from large, ground-based telescope arrays to ones that orbit way above us in space. And a team of astronomers is looking to build a telescope like no other, one that looks out onto the very first stars — from the Moon.

Scientists from the University of Texas, Austin are proposing a telescope to be built on the Moon. This is not a new idea. The concept was first mooted in the year 2008 by a team of astronomers from the University of Arizona. But after examining the proposal, NASA decided not to pursue the project at the time. But now scientists want to revive the idea with a specific goal in mind — to be able to study the first stars in the universe that formed shortly after the Big Bang. These stars are known as population III stars. Elusive population III stars are believed to have formed when the universe was merely 100 million years old, before galaxies had started to form. These first stars are thought to be 100 times larger than the Sun, formed from an ancient cosmic mix of hydrogen and helium. But these first stars have never been observed before since current telescopes are not able to see that far into the universe. Therefore, they remain a theory.