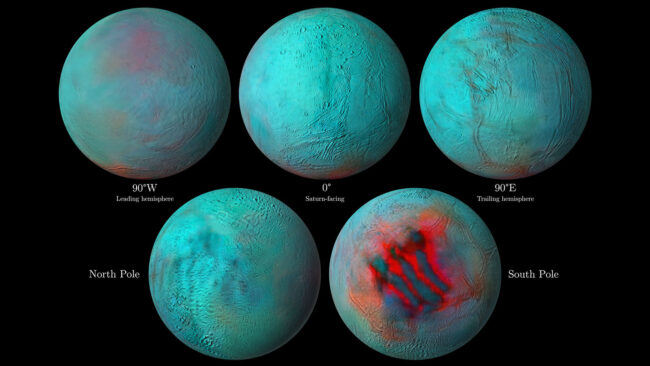 Saturn’s ocean moon Enceladus has fresh ice in unexpected place: Enceladus may be even more interesting than we thought.

Saturn’s geyser-spewing moon Enceladus may be even more active than scientists had thought. Fresh images created using data from NASA’s dead Cassini spacecraft show that Enceladus’ northern hemisphere was resurfaced with ice relatively recently. This new information adds to the known activity in the southern hemisphere, where Cassini spotted more than 100 geysers blasting icy water into space. Researchers spotted the northern changes after looking at the heat signature of Enceladus, using reflected sunlight parsed with Cassini’s visible and infrared mapping spectrometer instrument, or VIMS. “Thanks to these infrared eyes [on Cassini], you can go back in time and say that one large region in the northern hemisphere appears also young and was probably active not that long ago, in geologic timelines,” Gabriel Tobie, a study co-author and VIMS scientist at the University of Nantes in France, said in a NASA statement.

The team combined VIMS data with visible imagery captured by Cassini to create a new, global map of Enceladus in multiple wavelengths of light, both infrared and visible. The map shows that the infrared signals correlate with recent geologic activity on the moon, the researchers said. To the surprise of scientists, however, the new map also shows infrared features in the moon’s northern hemisphere. The data suggests that icy resurfacing also happened up north, but how is not yet clear. The changes could have been due to more icy jets, or slower ice movements through cracks in the crust, team members said. Enceladus is one of the most promising abodes for alien life in the solar system. In addition to the subsurface ocean and geological activity, the moon likely has an energy source that organisms could tap into — chemical reactions perhaps similar to those that sustain life near Earth’s deep-sea hydrothermal vents.