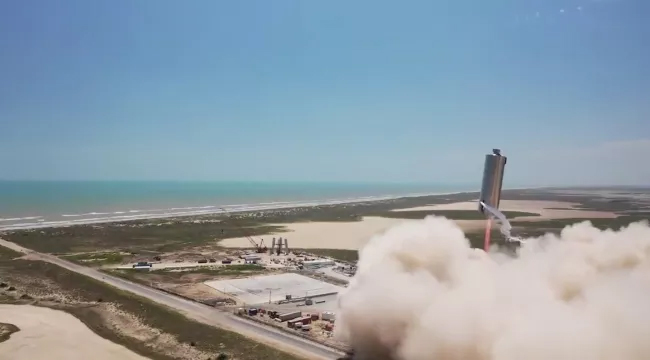 The next big leap for SpaceX’s Mars-colonizing Starship spacecraft appears to be right around the corner. Two full-size Starship prototypes, known as SN5 and SN6, recently performed 500-foot-high (150 meters) test hops at SpaceX’s South Texas facilities, near the village of Boca Chica. And the next vehicle in line is nearly ready to soar much higher, company founder and CEO Elon Musk said. “SN8 Starship with flaps & nosecone should be done in about a week. Then static fire, checkouts, static fire, fly to 60,000 ft [18,300 m] & back,” Musk said via Twitter on Saturday (Sept. 12).

Static fires are routine engine tests conducted while a vehicle is tethered to the ground. The engines that will be tested in this case are SpaceX’s next-generation Raptors — likely three of them, to get the SN8 up so high. SN5 and SN6 sported only a single Raptor, and those vehicles didn’t have nosecones or control-improving body flaps, either. (SN7 was a test tank that SpaceX intentionally burst during a pressure trial this past June, in case you were wondering.)

SpaceX is iterating toward a final version of Starship that will feature six Raptors and, Musk has said, be capable of carrying up to 100 people to the moon, Mars and other distant destinations. The 165-foot-tall (50 m) Starship will launch from Earth atop a gigantic rocket known as Super Heavy, which will be powered by about 30 Raptors of its own. The Starship vehicle will be powerful enough to blast itself off the moon and Mars, whose gravitational pulls are much weaker than that of our planet, Musk has said.