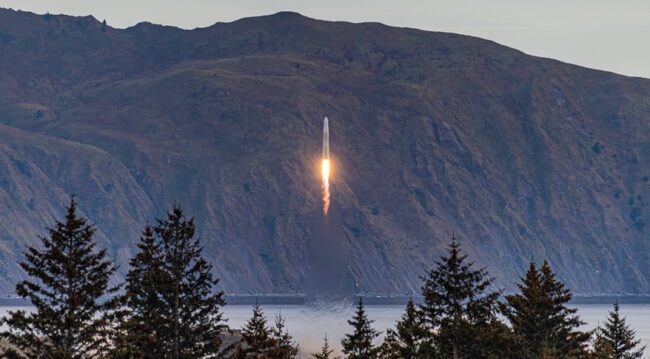 Astra launched its Rocket 3.1 vehicle late Sept. 11, but the flight ended during the small launch vehicle’s first-stage burn. The rocket lifted off from Pacific Spaceport Complex Alaska on Kodiak Island at 11:19 p.m. Eastern, according to a series of tweets by the company, which did not provide live video of the launch attempt. The lift-off took place after a previous attempt Sept. 10 was scrubbed because of a sensor issue.

The company later tweeted that the rocket successfully lifted off, but “the flight ended during the first stage burn.” The company did not immediately provide additional details about how long after launch the flight ended, or what terminated the flight. “It does look like we got a good amount of nominal flight time.” A video taken by an eyewitness showed the rocket’s engines shutting down while the vehicle was still in its early phases of ascent. According to industry sources, that shutdown took place about 30 seconds after lift-off. The rocket then fell to the ground near the pad and exploded. “Early in the flight, our guidance system appears to have introduced some slight oscillation into the flight, causing the vehicle to drift from its planned trajectory leading to a commanded shutdown of the engines by the flight safety system,” the company said in a Sept. 12 blog post.