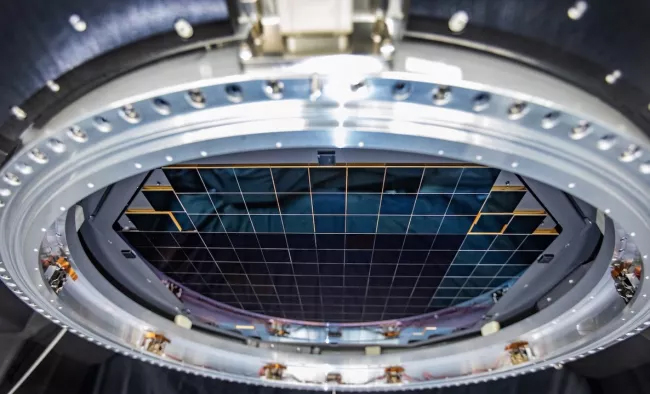 The camera core for the future Vera C. Rubin Observatory has snapped its first test photos, setting a new world record for the largest single shot by a giant digital camera. The imaging sensor array, which comprises the focal plane for Vera Rubin’s SUV-sized digital camera, snapped the 3,200-megapixel images during recent tests at the Department of Energy’s (DOE) SLAC National Accelerator Laboratory in California. (“SLAC” stands for “Stanford Linear Accelerator Center,” the facility’s original name.) The photos are the largest single-shot pictures ever taken, SLAC officials said — so big that showing just one of them full-size would require 378 4K ultra-high-definition TVs. The resolution is so good that a golf ball would be visible from 15 miles (25 kilometers) away. The first images don’t show distant golf balls, however. The SLAC team that’s building Vera Rubin’s LSST (Legacy Survey of Space and Time) Camera focused on nearby objects, including a Romanesco broccoli, whose intricately textured surface allowed the sensors to strut their stuff. The newly released images are part of extensive, ongoing tests designed to vet the focal plane, which has not yet been installed on the LSST Camera. That integration step will happen in the next few months, as will the addition of the camera’s lenses and other key components, if all goes according to plan.

The camera should be ready for final testing by the middle of next year, SLAC officials said. It will then be shipped to the Chilean Andes, where the Vera C. Rubin Observatory is being built. The observatory, previously known as the Large Synoptic Survey Telescope, will use its 27.6-foot-wide (8.4 m) mirror and 3.2-billion-pixel camera to conduct a landmark 10-year study of the cosmos — the Legacy Survey of Space and Time for which the camera is named. The camera will generate a panorama of the southern sky every few nights, amassing an astronomical treasure trove that will include imagery of about 20 billion different galaxies.