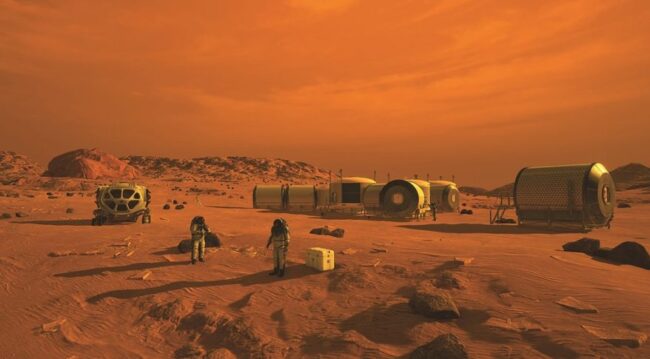 NASA’s Artemis program of human lunar exploration can help pave the way for human Mars missions, according to a new report, although some tweaks to those plans may be required. The report, released by the space exploration advocacy group Explore Mars during its virtual Humans to Mars Summit, is based on a workshop held last November that brought together representatives of NASA, industry and academia to explore approaches for affordable human exploration of Mars.

The workshop identified 85 activities or functions associated with human Mars exploration, ranging from human health to landing technologies and surface systems. A “significant” number of them can benefit from the Artemis program or ongoing research on the International Space Station, the report concluded. That would be augmented by work on Mars-specific technologies. “We should be looking at retiring risks, proving technologies and living and working on the moon in parallel with developing those specific, unique technologies,” said Lisa May, chief technologist for civil and commercial space at Lockheed Martin, during a panel discussion at the conference Sept. 2.

One area of study panellists noted is gaining experience in partial gravity, such as that on the surface of the moon or Mars. “We don’t know what we don’t know about being in partial gravity,” said Michelle Rucker, Mars architecture lead at the Johnson Space Center. NASA’s experience, she noted, has been almost entirely been in either terrestrial gravity or microgravity. “One data point between zero and one would be good for us.” The workshop, though, said that some changes to the Artemis program may be needed so it can better serve Mars exploration. “Simply having humans on the surface of the moon doing their work, doing their exploration and science, and building up a sustained presence, is not adequate,” May said. One example of a change is having extended missions on the lunar Gateway, which NASA currently proposes to use for relatively short stays by astronauts. “We could emulate Mars missions, Mars transit durations, by having crews stay for a longer time on the Gateway,” she said.