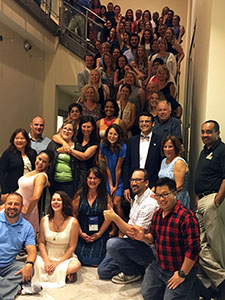 We would like to welcome our new Space Camp ambassadors

Krit Kunplin from Thailand, and Jose Santana from Dominican Republic Krit Kunplin played a leading role in bringing the NASA Space Exhibition to Thailand, which was the first country in South East Asia to host this NASA exhibition. During the President George W. Bush administration, Kunplin served as an international reporter and broadcaster for Voice